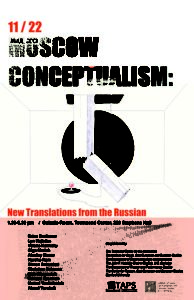 A spate of new translations is bringing the writers and artists of Moscow Conceptualism to an English-language readership for the first time. Even as they drew on currents in western art, the Moscow Conceptualists (1970s-1980s) weredistinguished by a singular focus on the Soviet experience, from the legacies of the avant-garde to the official culture of the Era of Stagnation. Serving as an ironic commentary on the entire arc of Soviet history, Moscow Conceptualism continues to exert a powerful influence on performance art in Putin’s Russia.

Our mini-symposium invites local scholars as well as American translators of the Moscow Conceptualists to read and discuss their work.