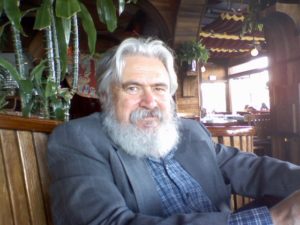 Arkady Alexeev (Аркадий Алексеевич Алексеев) was born in Leningrad on December 23, 1937, into a family of actors. His childhood and youth were overshadowed by the tragic events of Russian history. He started school in 1945 (the year when World War II ended). In 1955, he began his higher education at Leningrad University as a student of philosophy, and–after several years of forced interruption—was able to continue at the Herzen Pedagogical Institute, where he focused on languages (English and French) and linguistics, graduating with honors in 1965. He taught English at the Herzen Institute and pursued an advanced degree (Kandidat nauk) in English and linguistics. In 1975, he emigrated to the U.S. with his wife, Eugenia Alexeev, and their son, Sasha.

Alexeev started his American career as an instructor of Russian at the Defense Language Institute in Monterey, California. In 1981, he entered the Ph.D. program in the Department of Slavic Languages and Literatures at the University of California, Berkeley, specializing in linguistics, and received a doctorate in Slavic Languages and Literatures in 1986, for a dissertation entitled, “The Development of Verbal Fixed Phrases in Russian.” Professors Francis J. Whitfield and Johanna Nichols were among his advisers.
Alexeev taught Russian language at Berkeley for more than 30 years, beginning in 1981, and his remarkable knowledge and dedication has left a strong imprint on many generations of students. He taught his last class in late November 2015 (years after his official retirement), and died in Berkeley on January 19, 2016.

In their teaching evaluations, students left a vivid picture of Alexeev as a teacher and an eloquent record of appreciation and gratitude. Students comment on his remarkable knowledge, especially his insights into grammar, etymology and the history of both the Russian and English languages. Students write of him as “incredibly understanding,” “extraordinarily fair,” “always willing to work with the students,” an instructor who “encourages everyone, and offers his help to the smartest as well as to the most struggling students.” As one student put it: “The best materials I have read, the most Russian I have ever learned. Best instructor I have ever had.”

Johanna Nichols—Alexeev’s one-time academic adviser and later his colleague of many years—has said: “Arkady had the most finely honed intuitions about Russian, and the greatest ability to articulate them in both everyday and linguistic terms, of anyone I’ve ever known, and was by far the best Russian speaker I’ve ever worked with. This ability together with his understated but quick sense of humor informed his choice of language materials and his work with students.”

Former graduate students (some of them, themselves teachers of Russian) remember his wisdom, kindness, and gentle humor.

Arkady Alexeev’s whole life was dedicated to language: he published a number of articles in the field of linguistics and had a long and distinguished career as a translator. He began in 1961 as a technical translator at the Leningrad Crane Building Factory; one of his last translations, a memoir by the Russian mathematician Vladimir Maz’ya, was published in 2014. He was also a dedicated translator of Russian poetry into English, including a major project (still unpublished) of translating “Slovo o polku Igoreve”—“The Lay of Prince Igor’s Host”—in unrhymed verse. At Berkeley, Alexeev’s courses on the technique and fine art of translation, from Russian into English and from English into Russian, are legendary.

Arkady’s wife, Eugenia (Zhenya), a language teacher, and his son, the pianist Sasha Alexeev, remember him as a devoted husband and father, and as a man of many talents. He was an accomplished artist and painted large oil and acrylic paintings, pencil drawings and sketches. One of the paintings was an oil of an astronaut walking on the moon.Wood carving was another talent and he produced several statuettes of Roman and Greek philosophers. Arkady’s other passion was history. He wrote and published a historical novel, in English, The Adventures of Giulio Mazarini. His Holiness’ Diplomat (it appeared, in four volumes, from Fultus Corporation between 2004 and 2006), and he had completed another novel by the time of his death. His inspiration came in many forms. His son and wife remember annual family poetry writing, when everyone in the family would write poems for one another’s birthdays. When his son was still a child, Arkady would often sit at his bedside and tell him science fiction stories that he made up on the spot. Arkady took his family traveling around the whole U.S.A. in a motorhome. He had a pilot’s license and they often flew to exotic places to enjoy a retreat. (In Russia, the family traveled all over the country in a motor scooter, for which Arkady built a side car, using a shock absorber from the famous Russian T-34 tank.) One year, his wife bought Arkady a large telescope for his birthday, and they often went to a mountain top to explore the night sky. Arkady’s son remembers that his father used to say, “If I weren’t a linguist, I would have become an adventurer such as Magellan or Columbus. I would travel to all the farthest reaches of the world or perhaps space to discover new lands and new wonders.” The spirit of exploration, discovery and wonder pervaded all aspects of Arkady’s life. He was also an avid builder, and he built with his family a house in Monterey and then another in Berkeley. In their home, the Alexeevs housed new arrivals among Russian refugees, and many people enjoyed their hospitality. Arkady was a man who, through his creativity, inspiration, and dedication, gave freely to everyone around him.

His own path to freedom was difficult: in 1957, soon after his marriage, Arkady, then a student of philosophy, attempted to leave the Soviet Union by crossing the border in the Caucasus with his young wife. They were promptly arrested and Arkady spent three years in a labor camp (where he learned the builder’s trade), while his wife, Zhenya, was exiled to Siberia.
A modest and reserved man, Arkady never spoke about his gifts and accomplishments, or his work for others; he lived more than one life, and it was only at the memorial service, attended by family and friends, that his Berkeley colleagues learned some of the extraordinary facts of his remarkable biography.

As a linguist, translator, and language teacher, and as a man of many gifts and extraordinary generosity, Arkady Alexeev made an invaluable contribution to the study and knowledge of the Russian language and to the lives of many people. May his contribution live and grow in his books, his students, family and friends.